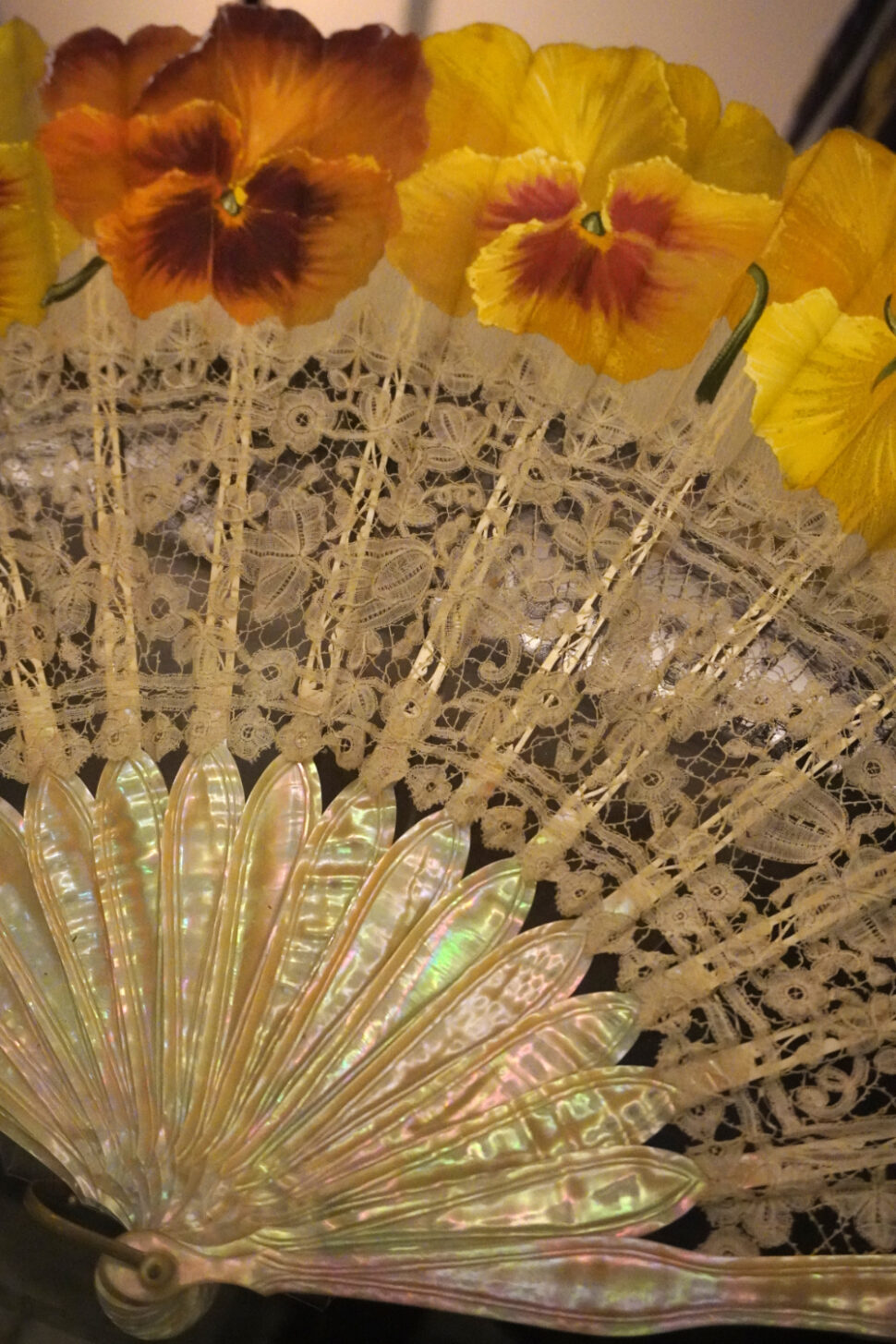 In a letter to Emma Vaughan on 8 August 1901 Virginia Stephen (later Woolf) wrote:

Our London season about which you ask, was of the dullest description. I only went to three dances – and I think nothing else. But the truth of it is, as we frequently tell each other, we are failures. Really, we can’t shine in Society. I don’t know how it’s done. We ain’t popular – we sit in corners and look like mutes who are longing for a funeral.

Vanessa and Virginia Stephen were motherless when they came of age at the turn of the Twentieth Century and their social debuts were arranged instead by their ambitious half-brother, George Duckworth. As the eldest, Vanessa was to be launched first. George had an ulterior motive for organising her debut: he was without a wife and thought his social position would be enhanced if he were seen in the company of his beautiful sister.

He plastered Vanessa with opals and amethysts and gave her a blue enamel butterfly for her hair. She was taken to Mrs Young, a dressmaker in South Audley Street, who designed for her a fashionable evening dress. Worn over a white underdress, its transparent black material glittered with sequins.

When Vanessa remained reluctant, George countered her reservations with coercion and blackmail, hinting that if she failed to ease his way into society he would be forced to rely on a whore to escort him. What’s more, he said, it was his solemn duty to ensure that her femininity blossomed in a safe environment; to fail in society was considered unfeminine and undesirable. So, kitted out with white gloves, fan and evening bag, and with a Malmaison carnation pinned to her dress, Vanessa stepped out awkwardly, to be launched.

It was the Edwardian period, a time when pleasure and marriage were pursued with even greater relish than usual. Behind the coming-out façade was the drive to keep the upper echelons breeding. There were debutante balls, state dinners, operas, theatre, garden parties and concerts to attend and the ‘smart set’ also met in grand country houses.

Most young debutantes entered into the fray breathless and blooming, but the whole enterprise caused Vanessa to shrink inwards, making her appear mournful and wooden. ‘Though I felt all the thrill of putting on such a frock,’ she wrote about her evening dress, ‘still I came to dread the sight of it, so miserable were the many evenings I spent covered in the filmy black and white sparkling sequins.’

There were also rounds of home visiting on Sunday afternoons, to the likes of Mrs Humphry Ward, a loud opponent of feminism, or Mrs WK Clifford, a crime writer with wonky teeth and a love of literary gossip. Worst of all was the well-connected Lady Arthur Russell, ‘a rude tyrannical old woman, with a bloodstained complexion and the manners of a turkey cock’. Devoid of small talk, Vanessa failed miserably, longing to be home at her painting easel instead.

Virginia is Roped In

Realising his little project was not working, George hurriedly arranged for Virginia to join Vanessa, in the hope that the girls would do better with each other for support. But Virginia merely added her own awkwardness and anxiety to the mix. Sometimes they would sit mutely together throughout an entire evening, speaking only to their hostess on arrival and departure. They felt out of place and realised they lacked the ‘social gift’. As Virginia wrote in her diary, ‘Seriousness is just as much out of place here as an old serge skirt.’

Nearly twenty years later Virginia visited a gathering at a house in Chelsea where, as described in a letter to Vanessa (November 1918), she saw ‘our entire past, alive, incredibly, the same as ever.’ Many of those present were from their parents’ generation and there was any number of men like George Duckworth:

…all dressed up so irreproachably so nice, kind, respectable – so insufferable – . You remember the kind of politeness, and the little jokes, and all the deference, and opening doors for one, and looking as if the mention of the W.C. even would convey nothing what ever to them…I couldn’t help seeing us in white satin at Mrs Young’s.

George’s intervention instilled in Vanessa a marked distrust of society. She stayed away from its froth and bubble as much as she could, preferring the company of close friends and fellow artists. It was Virginia who, as her confidence grew, came to enjoy society. She loved a party – according to her husband Leonard Woolf, the bigger the better. Although as a writer she needed the interior life, to be ‘washed by the flood…of my own thoughts’, she also felt the pull of gossip and gatherings. Virginia thought of her social side as something in her blood, like a ‘piece of jewellery I inherit from my mother.’ The very idea of a party excited her: the people, the conversation, the colour. And she herself became a person whom other people most hoped would be present: sparkling, charming, amusing, and interested in what others had to say.

Virginia was sensitive to the rise and fall of a room’s psychological temperature, its pace and noise. When her anticipation was matched by the experience she would be exhilarated, but Leonard observed that occasionally she would leave a boring party under a cloud of utter despair. This was due, he noted, to her ‘peculiar vulnerability to the mildest slings and arrows of (not very) outrageous fortune’.

Parties became fodder for Virginia’s writing, most famously, in Mrs Dalloway (1925) where a gathering that would usually be considered routine takes on a heightened significance. In this case Virginia uses a party to showcase many personalities in order ‘to criticise the social system, & show it at work, at its most intense.’

Clarissa Dalloway is the hostess of the party and as evening approaches her maid attends to the final details, taking time ‘to straighten a chair, to pause a moment and feel whoever came in must think how clean, how bright, how beautifully cared for.’

Soon there is the roar of voices as all that is frivolous and pompous in London society descends. People are announced ‘in an admirable manner’ by the hired butler, like a pack of old ghosts, some with faded memories of British rule in Burma, others fresh from the Indian Raj. The possibility of a visit by the Prime Minister hangs in the air. Mrs Walker, the cook, worries that the salmon is underdone. Lady Lovejoy has some trouble with her underbodice in the cloakroom. The men stand waiting for their partners in the hall, ‘sleeking down their hair’. Clarissa Dalloway is ‘delighted’ to see everyone and ‘at her worst – effusive, insincere’. She worries the whole thing will be a complete failure.

In another part of London, a shell-shocked young war veteran, Septimus Warren Smith, is on the brink of madness. His story is interwoven with that of Clarissa and her friends, their lives intersecting at the party’s climax.

What follows is a series of glimpses, behind the good breeding and cheerful façades, of the terrors of ageing and death. Virginia’s stream of consciousiousness style lets us into hearts and minds:

I dig out beautiful caves behind my characters; I think that gives exactly what I want; humanity, humour, depth. The idea is that the caves shall connect & each comes to daylight at the present moment.

As the parade of partygoers make their ‘rounds’, sharing snippets of opinions, observations and fleeting feelings, Clarissa comes to realise that the party will be alright, after all. And there is a sense that in spite of the ludicrous characters, with their narrow-minds, vanities and conceits, this pageant is a joyful one, an affirmation that life itself is worthy of celebration.

At Garsington, a Jacobean mansion in Oxfordshire, Virginia (and occasionally Vanessa) attended the celebrated gatherings that were hosted by Lady Ottoline Morrell. Ottoline’s passion for sumptuous and distinctive clothing showed off her six-foot frame and shock of copper hair to full effect. Unable to write or paint, she had settled on an unconventional life of active benevolence. The most interesting people of the day would flock around this queenly patroness to laugh, gossip and argue for days at a time.

While enjoying one such weekend Virginia wrote in her diary (23 June 1919) that parties no longer flustered her as much as they used to. Yet the demands of high society to dress up could still trigger her old fears and self-consciousness.

I don’t much care now about the great question of hair; I am resigned to my station among the badly dressed.

Doubting the beauty of her outfit, she told herself:

The worst moment will be when I come into the drawing room in my blue dress before dinner.

But she had a strategy: she could avoid having to make a grand entrance herself by going down early, before ‘Ott’, who ‘never gets dressed quick’.

When Virginia was forty, between writing Mrs Dalloway and To the Lighthouse, she put her ‘clothes complex’ into a short story called ‘The New Dress’. Mabel goes to a party in a quaint dress that evokes the style of her mother’s era.  She immediately realises it is a mistake as she seems to be sneered at by the fashionable guests. Retreating in shame, she feels like a fly drowning in a saucer.

No! It was not right. And at once the misery which she always tried to hide, the profound dissatisfaction – the sense she had had, ever since she was a child, of being inferior to other people – set upon her relentlessly, remorselessly, with an intensity which she could not beat off…

Yet Virginia, who could so suddenly be stricken with the same angst as her younger debutante self, might have been surprised and consoled to hear that she had elicited the following impression of Ottoline Morrell’s recorded in her diary:

This strange, lovely, furtive creature never seemed to me to be made of common flesh and blood. She comes and goes, she folds her cloak around her and vanishes, having shot her victim’s heart a quiverful of teasing arrows.

Elgar set his music to a poem of the same name by Clifton Bingham. The piece was extremely popular in 1901, the year of the Stephens’ debut.

The trailer for the 1997 film adapation of Mrs Dalloway, directed by Marleen Gorris, starring Vanessa Redgrave.

The opulent dress and fan in the pictures were taken at the Fashion Museum, Bath. This Museum has acquired many items of clothing belonging to Ottoline Morrell.

An article about Ottoline Morrell.

Woolf, Virginia. A Haunted House and Other Stories, Penguin, 1973 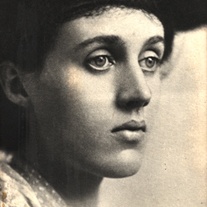 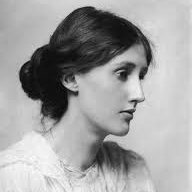