Atmosphere is a Human Thing, The French House, Soho 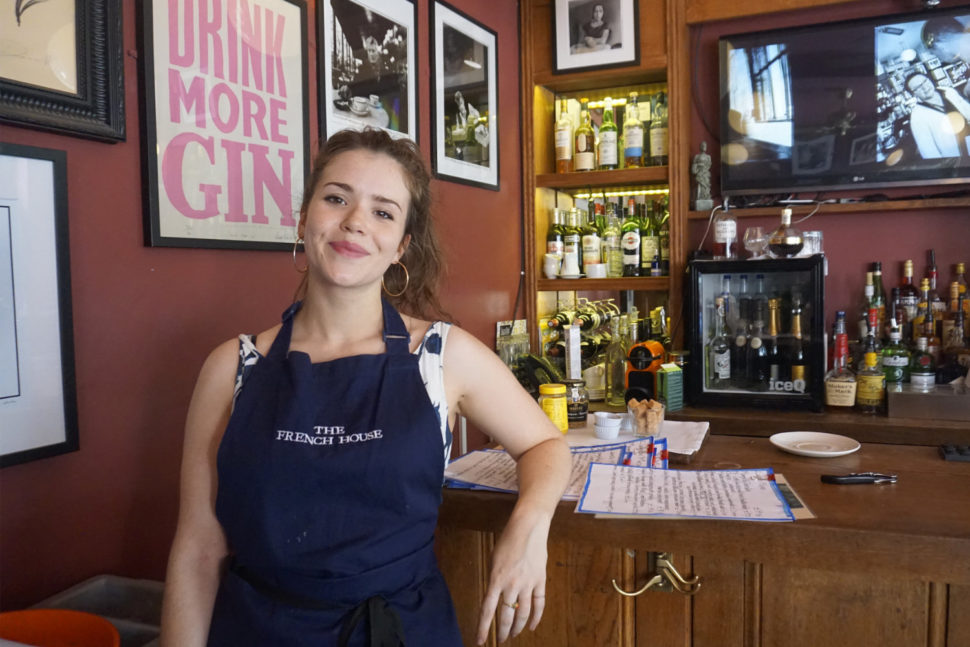 In a letter to her mother and brother on February 11, 1960, Sylvia Plath wrote:

A little middle-of-the-week letter to pass on some very pleasant news: picture (yesterday) your daughter/sister, resplendent in black wool suit, black cashmere coat, fawn kidskin gloves from Paris (Olwyn’s Christmas present) and matching calfskin bag (from Italy)…and of enormous and impressive size, sailing into the notorious York Minster pub [now The French House] on Dean Street in Soho, just off Shaftesbury Avenue, about 12:15 and up to the bar to meet a pleasant half-American, half-Scots young editor for the well-known British publishers, William Heinemann (publishers of Somerset Maugham, Evelyn Waugh, D.H. Lawrence, Erskine Caldwell, etc), and taking out a pen thereupon and signing on the contract for her first book of poems; namely, The Colossus.

Sylvia and her husband, the poet Ted Hughes, had recently moved to London having found America too expensive. ‘I could be as fond of London as of any other city in the world’, she wrote to her mother, ‘and plays, books, and all these things are so much more within one’s grasp.’

In her announcement about the contract, Sylvia wrote that would dedicate the volume of poetry to ‘that paragon who has encouraged me through all my glooms about it, Ted’. While she was with the publisher, Ted was waiting in the pub next door. Afterwards they went to a nearby Italian restaurant for a celebratory meal of veal and mushrooms, ‘having sat in the same restaurant in misery a month back, homeless and cold and very grim.’

Shortly afterwards, Sylvia Plath’s haunting poems (forty in all) would be launched into the world, in the collection The Colossus and Other Poems (1960).

From this holy day on, all pollen blown
Shall strew broadcast so rare a seed on wind
That every breath, thus teeming, set the land
Sprouting fruit, flowers, children most fair in legion
To slay spawn of dragon’s teeth: speaking this promise,
Let flesh be knit, and each step hence go famous.

‘Wreath for a Bridal’

The collection received wide critical acclaim. Seamus Heaney wrote: ‘On every page, a poet is serving notice that she has earned her credentials and knows her trade.’

Arguably one of London’s most famous pubs, with its French flag flying out the front, The French House is well and truly part of Soho’s cosmopolitan history, one of the last bastions of louche and languid old Soho.

From 1914 it was owned by Belgian Victor Berlemont. He was the first foreigner to become the landlord of a British pub and with his French accent and extravagant moustache, he lent the place a Gallic air. His son Gaston succeeded him in 1951 and continued as landlord until shortly before his death in 1999.

The French was popular with writers and actors, artists and street walkers, advertising and publishing types, and it was not at all cliquey. Among its regular drinkers were Wyndham Lewis, Dylan Thomas, Stephen Spender, Nina Hamnet, and later Auberon Waugh, Anthony Burgess, Francis Bacon, Peter O’Toole, Lucien Freud, Oliver Reed and John Mortimer. Brendan Behan is thought to have written large chunks of The Quare Fellow here, offending patrons by eating boeuf bourguignon with his bare hands. Orson Welles and Errol Flynn went wine tasting in the cellar. The painter Augustus John and his friend, writer and caricaturist Max Beerbohm used to drink absinthe together at the bar.

During the war, novelist and artist Denton Welch, who loved London for its ‘evil, racy little faces (and) the whiff of leather and stout from the swing-doors of pubs’, was a fan of the French. In his wartime journal he recorded the magnetism of the place:

We fought our way in, pushing through the crowd of sailors, whores, airmen, negroes and French sailors. Close to my ear people whispered to each other earnestly, ecclesiastically. The thimblefuls of golden whisky spilt on dark cloth when elbows were jogged. Someone said playfully, “I’m feeling hysterical.”

Wine, Ricard and champagne have always been preferred over beer at this pub, where only half pints of beer have been served since the 1920s. Victor banned pint glasses because French sailors kept smashing them over each other’s heads. The emphasis on wine endeared the place to French expatriates, including General Charles de Gaulle. After the fall of France in June 1940, de Gaulle had fled to London where he formed the Free French forces. Through most of the Second World War he met his Resistance colleagues in an upstairs room (de Gaulle’s right-hand man Gaston Palewski, the love of Nancy Mitford’s life, would have been amongst them). De Gaulle’s rallying speech to the French people he had left behind, ‘À tous les Français,’ is said to have been written in the small room above the bar.

The pub’s French associations drew other French visitors including Maurice Chevalier, Edith Piaf and various vaudeville artists and sporting stars. Victor was a fan of boxing and installed a ring in the basement for his hero, French boxer Carpentier, to take on those who dared. A number of street walkers, many of them the stylishly dressed French women known as ‘Fifis’, would gather at the pub for a split of champagne or a Pernod. If approached by unwanted punters, they would appeal to Gaston for help and he would intercede. He thought the world of these girls and made sure they were safe in his pub: ‘I’d tell the men to hop it’, he said.

An Encounter with ‘The Beast’

In her memoir, cook and writer Theodora FitzGibbon recalled heading to the French Pub with Dylan Thomas one evening, after seeing the Fritz Lang film M. In the film a young Peter Lorre played a child murderer, based on a German serial killer, and they were chilled by both the subject matter and the fact that Lorre so closely resembled Thomas.

With a sense of relief, they arrived at the crowded French, where the reassuring Monsieur Berlemont ushered them to a small marble-topped table at the back of the pub, beneath his signed photographs of Maurice Chevalier. But opposite them, further along the alcove, sat a large man who Theodora said resembled an angry tenant farmer. He stared at them, long and hard. Thomas appeared disturbed and clearly knew the man although he refused to tell Theodora anything about him.

To distract them, Thomas pulled out some dog-eared paper and they began a drawing game, taking turns to convert a doodle into something recognisable. When they had finished, they noticed the man giving the pot-boy a folded piece of paper which he brought across to them. Their chills returned when they saw on the piece of paper a drawing that was very similar to the one they had just completed. Theodora wrote:

The effect was weird and uncanny: it produced an inner trembling in me; Dylan, almost white-faced, stood up and hustled me out. Outside, the summer evening seemed chilly, and Dylan shivered.

When Theodora asked him what had just happened his eyes widened like ‘tawny marbles’. He told her they had just had a brush with Aleister Crowley, the Black Magician who called himself the ‘Black Beast’. Thomas had no desire to get mixed up in his creepy magic and did not return to the pub for some weeks.

The Essence of Soho – Gaston Berlemont

Gaston became part of the fabric of Soho and made his pub a warm and welcoming place. Like his father, he wore a handlebar moustache and with his pastis-drinking and extravagant hand kissing, he laid on the French charm. Regulars knew full well his father was actually Belgian and that Gaston had been born upstairs, yet in the cutthroat world of old Soho he got away with his French ways because he was kind. He used to cash cheques even knowing their propensity to bounce, becoming one of Soho’s unofficial banks. And rowdy customers were ejected with the greatest courtesy, sometimes even supplied with the taxi fare home.

In the late fifties with changing fashions the bohemian drinking culture paved the way for teenage coffee bars, which flowered into the sixties pop culture of Soho’s Carnaby Street. By the seventies, only society’s rejects seemed to want to come to the French. But the pub was rediscovered later that decade and into the eighties. Punks and art students from St Martin’s would hover around the northern (visitor) end of the bar, while old bohemians took up their posts at the southern end. Throughout the decades, both the 1935 décor and Gaston himself remained unchanged. He finally retired in 1989 and was given a big send-off on Bastille Day. In that same year he argued that his pub had never really gone out of fashion:

The crowd we have now is just a carbon copy of the same crowd that was coming in 40 or 50 years ago when I was a boy. They are the same type of people…They themselves create an atmosphere. It’s no use putting up a couple of plastic onions and saying you’re creating a French atmosphere, it doesn’t work like that. Atmosphere is a human thing, concerning hearts and souls.

I swear, some of Gaston’s spirit remains in this wonderfully warm, hospitable pub. It felt like home. The spiced-plum coloured walls are lined with the photographs and pictures Victor hung so many years ago (they are actually copies, as Gaston took the originals when he retired). The rule of no music, poker machines, television or mobiles makes the French Pub a rare outpost for good conversation. If you’re alone, there is plenty of quiet for reading or thinking.

I had a most delicious meal of lettuce and peas, French and spring-like. Two men flirted in the corner over their long, leisurely lunch; an American family was seated in the other corner, and from the window I could see a man in a wheelchair on Dean Street, draped in an enormous rainbow scarf. I only wished the walls could talk.

Some wonderful photographs of the pub’s clientele on The French House website.

You can read Sylvia Plath’s poem ‘Colossus’ on the Poetry Foundation website.

Read General Charles de Gaulle’s famous speech, ‘A Tous Les Francais‘ and its translation (said to have been written at the French pub).

An interview with the present owner of the French and former cabaret artist, Lesley Lewis. 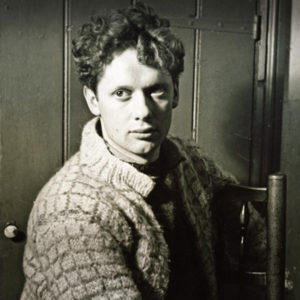 Dylan Thomas (1914-1953) was a Welsh poet and writer, known for his lyrical and deeply emotional work as well as his turbulent personal life. 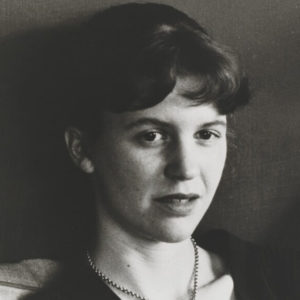