Music: The North Star Grassman and the Ravens, Sandy Denny 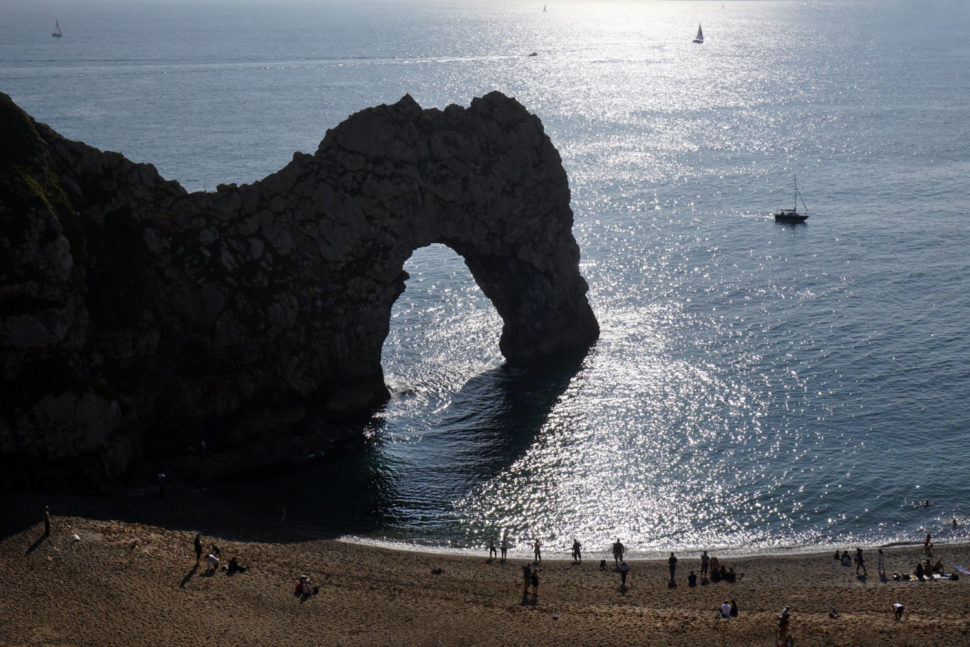 In September 1820 John Keats left his beloved Fanny Brawne in London. He was suffering from tuberculosis and on the advice of doctors was headed for the warmth of Italy on board the Maria Crowther. His friends, desperate to save him, had cobbled together the money for his fare (his earlier story can be read here).

For a fortnight the ship was beset by storms on the journey along the English Channel. Accompanying Keats on this trip was his friend, the painter Joseph Severn, who documented their travels. The ship was built for trade, not comfort, and they were squeezed into a cold, wet cabin with three others, including a young woman also suffering from tuberculosis. As they passed Dover, the waves made the passengers violently ill and Severn described them as ‘four faces bequeathing to the mighty deep their breakfasts.’

According to a letter of Severn’s, ‘Bright Star’ was written under ‘most interesting circumstances’. Keats had been exhausted by the mountainous waves and violently rolling ship. But on a fine and tranquil day the Maria Crowther reached calm waters in a bay off the Dorset coast, between Studland and Portland. While waiting for favourable winds to carry them down the channel and out to sea, the captain had let his ill-tempered passengers disembark. Severn wrote that they landed on a shore with ‘beautiful grottoes’, caverns and ‘fine verdure and cottages’. These had the effect of,

transporting Keats once more into the regions of poetry; he showed me these things exultingly, as though they had been his birthright. The change in him was wonderful, and continued even after our return to the ship, when he took a volume (which he had a few days before given me) of Shakespeare’s Poems, and in it he wrote me the subjoined Sonnet, which at the time I thought the most enchanting of all his efforts.

Bright star, would I were stedfast as thou art—

Not in lone splendour hung aloft the night

And watching, with eternal lids apart,

The moving waters at their priestlike task

Or gazing on the new soft-fallen mask

Of snow upon the mountains and the moors—

To feel for ever its soft fall and swell,

Awake for ever in a sweet unrest,

And so live ever—or else swoon to death.

Although romantic, this account of how ‘Bright Star’ was written, is not accurate. It is believed that the sonnet had been written a year or two earlier as a declaration of love for Fanny Brawne. She had copied it into a book of Dante, and Keats made a copy in his volume of The Poetical Works of William Shakespeare. Keats’s biographer Robert Gittings believes that Severn saw his friend brooding over this poem, written in his own hand, and made the mistake of thinking he had just composed it.

Yet as Gittings observes, Severn’s account contains a symbolic truth: the sonnet had become a farewell to Fanny Brawne, to England, and to life itself. Written with the knowledge that he would die young, it was indeed one of his finest and most moving sonnets, expressing a desire to be as constant and unchanging as a bright star, yet achieve the same steadfastness through the human warmth and intimacy of his lover’s embrace. On the ship Keats wrote that the prospect of leaving Fanny

is beyond every thing horrible – the sense of darkness coming over me – I eternally see her figure eternally vanishing.

These waters were his last sight of England. Rome became his final resting place.

Nearly a hundred years later, in 1914, Keats’s biographer Sidney Colvin sought help from his friend Thomas Hardy to identify the location where Keats had been put ashore for one last time. Hardy was an obvious person to consult with his intimate knowledge of Dorset, the county of his birth. After reading Severn’s description, Hardy wrote that the reference to ‘splendid caverns and grottoes’ must have meant they landed at Durdle Door, close to Lulworth Cove.

To see it from the inside (which would give the impression) they would have landed in the cave, & have walked over tide cliff to the west, & down behind the “Door.” The walk would have taken them only a few minutes.

In a second letter to Colvin, he added that the ‘cottages’ Severn mentioned would have belonged to the adjoining village of Lulworth Cove. Hardy had used this cove himself as the fictional setting for Sergeant Troy’s near drowning in Far from the Madding Crowd. He had renamed it Lulwind Cove, and described it as a ‘miniature Mediterranean’.

Hardy had an affinity for the Romantic poets and possessed a lifelong admiration for Keats. In 1887 he and Emma took a trip to Italy and visited the graves of Keats and Shelley in Rome, as Oscar Wilde had done ten years before. Violets were growing on their graves and Hardy picked some to send to a friend. His desire to pay homage and communion is expressed in his poem ‘Rome at the Pyramid of Cestius Near the Graves of Shelley and Keats’ (1901). And moved by Keats’s connection to Lulworth, he wrote this poem in 1920, casting himself in the role of time traveller.

At Lulworth Cove a Century Back

Had I but lived a hundred years ago
I might have gone, as I have gone this year,
By Warmwell Cross on to a Cove I know,
And Time have placed his finger on me there:

‘You see that man?’ — I might have looked, and said,
‘O yes: I see him. One that boat has brought
Which dropped down Channel round Saint Alban’s Head.
So commonplace a youth calls not my thought.’

‘You see that man?’ — ‘Why yes; I told you; yes:
Of an idling town-sort; thin; hair brown in hue;
And as the evening light scants less and less
He looks up at a star, as many do.’

‘You see that man?’ — ‘Nay, leave me!’ then I plead,
‘I have fifteen miles to vamp across the lea,
And it grows dark, and I am weary-kneed:
I have said the third time; yes, that man I see!’

‘Good. That man goes to Rome — to death, despair;
And no one notes him now but you and I:
A hundred years, and the world will follow him there,
And bend with reverence where his ashes lie.’

‘The North Star Grassman and the Ravens‘, Sandy Denny

Hardy’s poem has been painted onto the wall of a building at Lulworth. While reading it, this song of Sandy Denny’s came to mind:

They stood upon the deck,
As the ship went out to sea.
The wind it took the sails,
And left the land a memory…

That is you to me,
That is where I think you are.
Never on the land,
But gone to find the North Star.

Although they are less than two miles apart, we visited Lulworth Cove and Durdle Door on separate occasions. We arrived at Durdle Door on a summer’s afternoon on one of those days, common in England, when a white haze creeps across the sky and bleaches the colour from the landscape. But then it cleared to a golden evening. The bay was full of boats, swimmers, and people climbing up the limestone arch and diving off.

The sheer beauty of it all lent a dream-like cast to the day. It is no surprise that this extraordinary scenery revived Keats, freed temporarily from his stinking hell-hole of a cabin.

We visited Lulworth Cove briefly, arriving after sundown. Alas, we had to leave early the next morning, before the sun had sufficiently lit the cove’s almost perfect circle of brilliant blue water: that ‘miniature Mediterranean’, as Hardy so aptly put it. But the feeling of the place stays strong in me.

Many years ago my parents spent their honeymoon here, staying a week at a guest cottage by the sea. I have included a picture of them, arm in arm, swinging down the lane. They were barely in their twenties and head over heels in love.

Theirs was a love that lasted. I wonder whether John Keats and Fanny Brawne’s love would have endured too.

And a reading of Hardy’s poem ‘At Lulworth Cove a Century Back‘.

The trailer for the film Bright Star (2009) based on the last three years of Keat’s life and his relationship with Fanny Brawne, directed by Jane Campion, starring Ben Wishaw and Abbie Cornish.

Lulworth Cove was used as the location for the opening scene of the film Far from the Madding Crowd (2015), directed by Thomas Vinterberg, starring Carey Mulligan.

Read more here about Keats and Severn’s journey to Italy on the City of London Website. There are other articles about Keats on this site too.

Read more about the life of Keats, Hardy and their poems on the Poetry Foundation website.

The Keats Foundation offers lectures, reading and conferences on Keats. 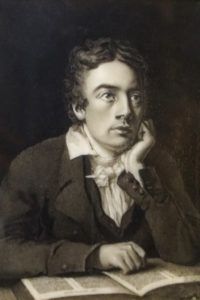 John Keats (1795-1821) was a Romantic Poet. Despite producing just three slim volumes of poetry in his short life, the scope ranges from odes and sonnets, to epics. 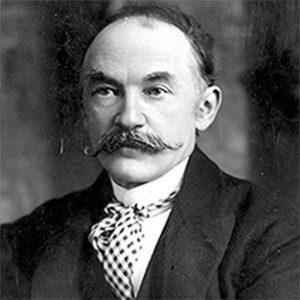 Thomas Hardy (1840-1928) was an English novelist and poet. A Victorian realist in the tradition of George Eliot, he was influenced both in his novels and in his poetry by Romanticism, and set much of his fiction in Wessex, his fictional name for England’s South West.