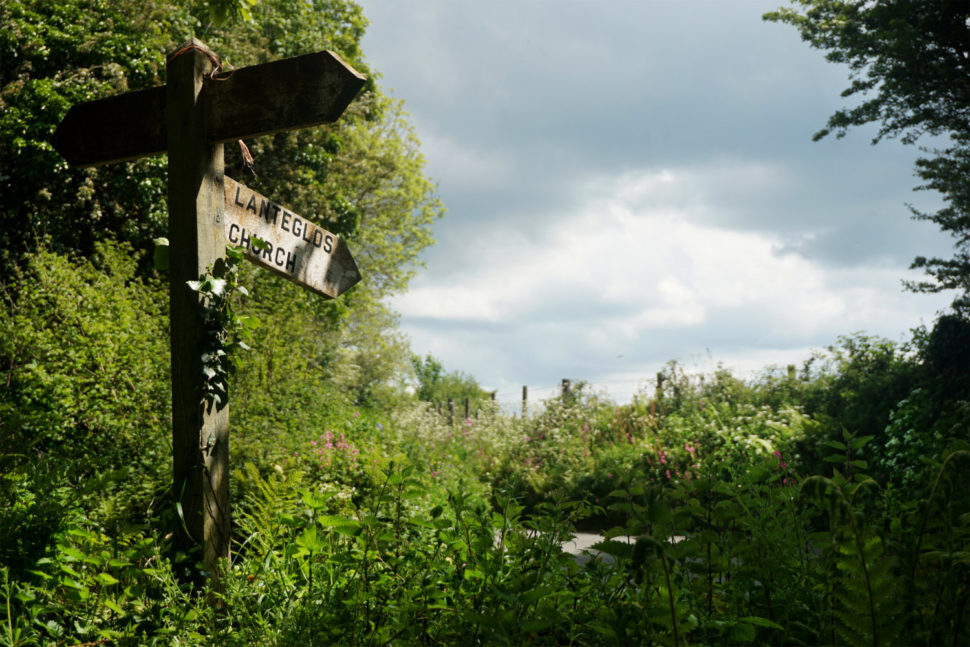 On the evening before she married Tommy ‘Boy’ Browning, Daphne du Maurier wrote in her diary:

Whatever happens, I want to remember that I am doing this with my eyes open, and because I want a fuller life, greater knowledge, and understanding. So adieu…Daphne du Maurier.

In the late summer of 1931 Daphne du Maurier was spending time at Ferryside in Cornwall’s Bodinnick. The former boathouse was a much-loved retreat for Daphne and her family. She and her sister Angela were sitting near a window with its panoramic view of Fowey Harbour, when Angela pointed out a handsome man travelling upriver in a boat. Daphne liked the look of him too.

That was it for the time being, but Major Browning, a decorated officer from the Grenadier Guards, had made his intended impact. Captivated by Daphne’s first novel The Loving Spirit (1931), which she had written at the age of twenty-two (you can read about that here), he had sailed his motor boat Ygdrasil to Fowey to see the setting of the book for himself, and was determined to meet its author too.

He discovered that his father had met hers at the Garrick Club, so according to etiquette it was entirely proper to contact her.

I believe my late father, Freddie Browning, used to know yours… I wondered if you would care to come out in my boat?

Tommy, nicknamed ‘Boy’, was ten years older than Daphne and a celebrated war hero. He was also a skilled athlete and in the late 1920s had competed in the Winter Olympics as a part of the bobsled team. Daphne was immediately attracted to this clever, energetic man, who was not afraid of revealing his vulnerability. They shared a similar sense of humour, a love of the sea and of boats.

Soon, Daphne was confiding to her former governess Tod that she was in love:

He is the best looking thing I have ever seen. The only snag is that he is a Major in the Grenadier Guards and I can’t see myself following the Drum, can you?

This would indeed become a ‘snag’, but she was smitten, as was he.

He leaps down here in his car and we spend long days out at sea in his boat. We spend most of the time cursing each other for spoiling the paint on the boat and yelling warning if a lobster pot floats near the propeller. No sighs and gazing at the moon for me, thank you.

After only three months and despite her protestations that she did not think herself the sort to get married, she startled her more conservative beau by proposing to him herself. Boy accepted immediately, feeling guilty that he had not been the first to ask.

On July 6, 1932 Daphne wrote from Bodinnick to her parents Muriel and Gerald in London:

We think we will be married. I hope you don’t mind. We decided last time he was down it would be nice. I don’t want to be all pompous though, with engagement rings and things, so I think it will be enough to tell everyone when it happens, don’t you?’

She hoped her mother would not be ‘too staggered’, writing that she herself did not quite know what she was doing. This was not a letter to inspire confidence, and apparently when her father Gerald read it, he burst into tears. But her parents had met Tommy in London and liked him, and they were quickly reconciled.

Daphne wrote to her girlfriend Foy Quiller-Couch that the wedding would be:

early one morning in Lanteglos church before anyone is awake, with the grave-digger for witness, and so out and away to Helford and beyond.

They announced their engagement and received countless letters of congratulation. But all Daphne wanted was for the wedding to be over so they could ‘disappear’. The date was fixed for 19th July. Daphne’s parents came down but at such short notice many significant others were unable to attend, including Tommy’s mother and Daphne’s sisters Angela and Jeanne. The couple asked their new friends George Hunkin, the boat builder from Polruan, and his wife to act as witnesses.

As the time approached, Daphne ‘felt in a dither’ and Boy, who had always suffered from a nervous stomach, said he had ‘chronic indigestion’. Her father turned silent, and the jokes of the best man (cousin Geoffrey of the wandering hands from this story) fell flat. Only her mother seemed composed, carefully ironing Daphne’s old faded blue coat and skirt, the night before.

They were travelling to the church by boat, just as the young couple in The Loving Spirit had done, and they rose and dressed early to catch the tide. There is a hatchway window at Ferryside with a wide view of Fowey harbour, and looking through it that morning, Daphne noticed that the neighbours in the houses opposite had hung out flags to celebrate her passage to the church.

The church of St Wyllow, or Lanteglos church as the locals call it, was significant for Daphne. Jane Slade, the woman on whom the heroine of The Loving Spirit was based, is buried in its churchyard. On walks beside the river with her dog Bingo Daphne would often take the detour to the church, but she was less interested in the church’s formal services than in communing with nature. This passage in The Loving Spirit reflected her preference.

Somehow she had no wish to go tonight. She did not care to listen to the parson’s words, nor to join in singing the hymns with the others, nor even kneel by the altar rail to receive the Blessed Sacrament. She had a mind to slip away in the darkness, and run for the cliff path that overlooked the sea. There’d be a moon over the water, like a path of silver leading away from the black sea to the sky, and she’d be nearer to peace there than on her knees in Lanoc Church. Nearer to something for which there was no name, escaping from the world and losing herself, mingling with things that have no reckoning of time, where there is no today and no tomorrow.

At 8.15 am they set off from Ferryside in bright sunshine. Daphne, her parents and her cousin Geoffrey went ahead in their boat the Cora Ann, and Tommy and the Hunkins followed in Ygdrasil. The short journey took them up the Fowey Harbour and left into Pont Pill, a typical Cornish wooded creek (where Daphne had found the stranded schooner, the Jane Slade), before mooring at a little quay.

The small party walked across the footbridge, up a footpath to the road, then climbed the narrow lane to the church. Daphne loved this walk. The hedgerows were packed with the flowers of summer: pink campion, white ox-eye daisy, cow parsley and wild rose. Age has worn the path so deep into the ground that the gravestones appear almost at head height, and the stonework of the old church rises majestically behind them.

The church bells pealed as the small bridal party entered this plain and ancient place. It was a simple service and Daphne was surprised by how moved she felt. Afterwards, Mrs Hunkin called her Mrs Browning, which felt to her strange.

Back at the harbour, people seemed to know they had been married and waved from their cottages. The Quiller-Couches, the learned Cornish family who had become such important friends to Daphne, rowed out in Q’s bright red rowing boat to give them a bottle of their homemade sloe gin. There was a breakfast of sausages and bacon cooked in the galley of Ygdrasil. And then the bride and groom sailed for the open sea.

On their honeymoon they headed back inland for the Helford River, a large estuary on the eastern side of Cornwall’s Lizard Peninsula. Here they discovered Frenchman’s Creek. This was to become their private trysting place and sowed the seeds in Daphne’s mind for another best selling novel.

The solitary yachtsman who leaves his yacht in the open roadstead of Helford, and goes exploring up river in his dinghy on a night in midsummer, when the night-jars call, hesitates when he comes upon the mouth of the creek, for there is something of mystery about it even now, something of enchantment.

At the time of her interview with Ray Plomley for Desert Island Discs du Maurier mentioned that she seldom listened to music any more, and reading between the lines, I don’t think it was a special passion of hers. I suspect she preferred the sounds of nature. These are the bells of St Fimbarrus an ancient church in the heart of Fowey, across the harbour from Bodinnick and Lanteglos church, where Kenneth Graham and Elspeth were married. You can read their story here.

The church of St Wyllow dates to the late fourteenth century. It was named after a Christian hermit who lived at Pont and was beheaded in 596. His head was brought to this site, which decided the location for an earlier church. It is a lonely place, difficult to reach but like Daphne, I found myself drawn to it again and again and usually had it all to myself.

The walk the wedding party took in 1932 has barely changed for centuries. Pont Pill leads to the hamlet of Pont. Once a busy little harbour before the creek silted up and limited access, it has a quay, a former granary, two limekilns, malt house, corn mill and three watermills (dating from 1293 to 1423). The church and its surroundings are unutterably romantic and as Daphne said, they ‘couldn’t have chosen anything more beautiful.’

Details about the church of St Wyllow.

A walking trail for the Polruan coast and creek walk, including a diversion to Lantaglos church.

The Farm House at Pont Pill by the quay where the wedding party moored is available as a holiday rental. It is run by the National Trust.

Alternatively there is accommodation at The 400 year-old Old Ferry Inn in Bodinnick, close to Daphne’s first house in Cornwall, Ferryside. They offer lunch here too.

The official visitor guide for the area is here. 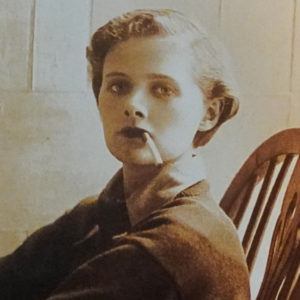