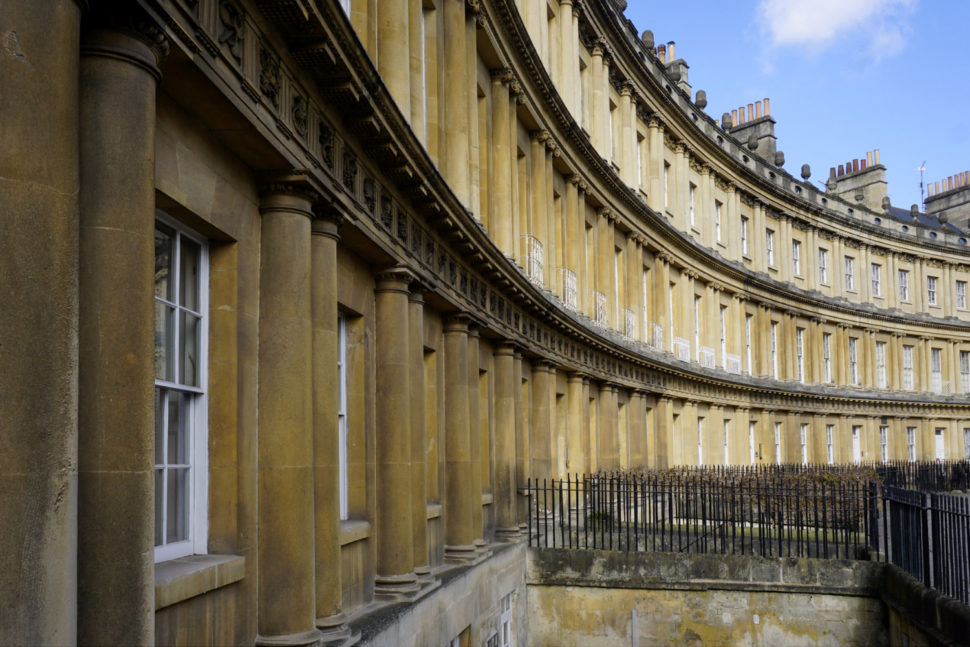 Another stupid party last night; perhaps if larger they might be less intolerable, but here there were only just enough to make one card table, with six people to look over, & talk nonsense to each other.

When Jane Austen learned her father was retiring and her parents were moving to Bath, it is said she fainted. She and her sister Cassandra were single women in their mid-twenties, with few prospects. They were obliged to leave their happy childhood home in rural Steventon and follow their parents.

The sisters did not relish the idea of Bath. They loathed the pretension, the petty snobbery and jockeying for social position, what Jane later called in Persuasion the ‘littlenesses’ of a town. Bath had a reputation for being a prime place for husband-hunting, and they suspected it had been chosen to improve their chances of marriage, which would have felt humiliating for them. Jane arrived with her parents first and reported to Cassandra (who was staying with their brother in Kent), the city was ‘all vapour, shadow, smoke & confusion.’

It was not quite the town it had been in its heyday of the mid 1700s. Then Bath had been smaller and more socially exclusive, frequented by aristocrats, politicians, artists and people of influence. By the time the Austens arrived, far more people could afford to holiday there, and the city had expanded fourfold, with terraces and crescents crowning its hills. Put off by its growing popularity, the aristocrats had moved on.

The glittering balls at the Assembly Rooms, once presided over by Beau Nash, could no longer be described as glamorous nor exclusive. While attending a ball there, Jane looked on amused at a drunken woman chasing her drunken husband around the place, and spotted a notorious adulteress, whose elopement with a Captain had sent a frisson of delight through Hampshire society.

She wrote to Cassandra:

I am proud to say that I have a very good eye at an adulteress, for tho’ repeatedly assured that another in the same party was the she, I fixed upon the right one from the first…She was not so pretty as I expected…she was highly rouged and looked rather quietly and contentedly silly than anything else.

The trend was for smaller, staid parties at private houses. Jane, who preferred the anonymity of a crowd, was on constant display at such gatherings. There was nowhere to hide. ‘We are to have a tiny party here tonight: I hate tiny parties – they force one into constant exertion’, she wrote to Cassandra.  Evenings would be spent drinking tea over superficial exchanges with the likes of a Miss Holder, for instance, with whom she ‘adjourned after tea into the inner Drawingroom, to look over Prints and talk pathetically. She is very unreserved & very fond of talking about her deceased brother & Sisters.’

There was a succession of dull people with whom one had to be civil:

I respect Mrs. Chamberlayne for doing her hair well, but cannot feel a more tender sentiment. Miss Langley is like any other short girl, with a broad nose and wide mouth, fashionable dress and exposed bosom.

The town swarmed with people just needing to get through the hours. One visitor to Bath at the time described it as

a sort of great monastery, inhabited by single people, particularly superannuated females. No trade, no manufactures, no occupations of any sort, except that of killing time, the most laborious of all.

The rounds of parties and morning visits must have been insufferable for Jane who wanted to write. Back in Steventon, she had managed to strike a balance between family and her work, a pattern of sociability and solitude that had resulted in a great burst of writing in the late nineties. In Bath Jane’s voice was largely silenced and she barely wrote a thing.

Yet she steered clear of self-pity. Her letters lack her former exuberance but are bright and matter of fact. She makes the best of a situation she is unable to control. And she stores memories of Bath for another time when she is freer to write again (which you can read about here).

Nine years after leaving the city, she drew on her experience for Persuasion. The novel’s heroine Anne, like Jane, is forced to move to Bath, and she echoes Jane’s sentiments about the city and its parties:

Captain Wentworth left his seat, and walked to the fire-place; probably for the sake of walking away from it soon afterwards, and taking a station, with less bare-faced design, by Anne.

“You have not been long enough in Bath,” said he, “to enjoy the evening parties of the place.”

“Oh! no. The usual character of them has nothing for me. I am no card-player.”

“You were not formerly, I know. You did not use to like cards; but time makes many changes.”

“I am not yet so much changed,” cried Anne, and stopped, fearing she hardly knew what misconstruction. After waiting a few moments he said, and as if it were the result of immediate feeling, “It is a period, indeed! Eight years and a half is a period.”

Jane was forced to sell her piano for a pittance before moving to Bath and was without one for half a decade. She loved music intensely and this song is taken from one of her songbooks. Pleyel was one of her favourite composers.

I, too, would have loathed the Bath of Jane’s Austen’s time but it is now a fascinating city, full of bookshops, music venues and a strong arts scene. Its glorious honey-coloured Roman and Georgian buildings are difficult to resist.

For lovers of Jane Austen, there is the Jane Austen Centre, where guides in Regency costume, and the opportunity to dress up in a Georgian setting brings the era back to life. The Centre offers walking tours to visit Jane Austen’s regular haunts, including the elegant Assembly Rooms, and No. 1 Royal Crescent, a museum that provides a glimpse of a furnished and decorated home between the period 1776-1796, a touch before the Austens arrived to live in the town. There is also an annual Jane Austen Festival.