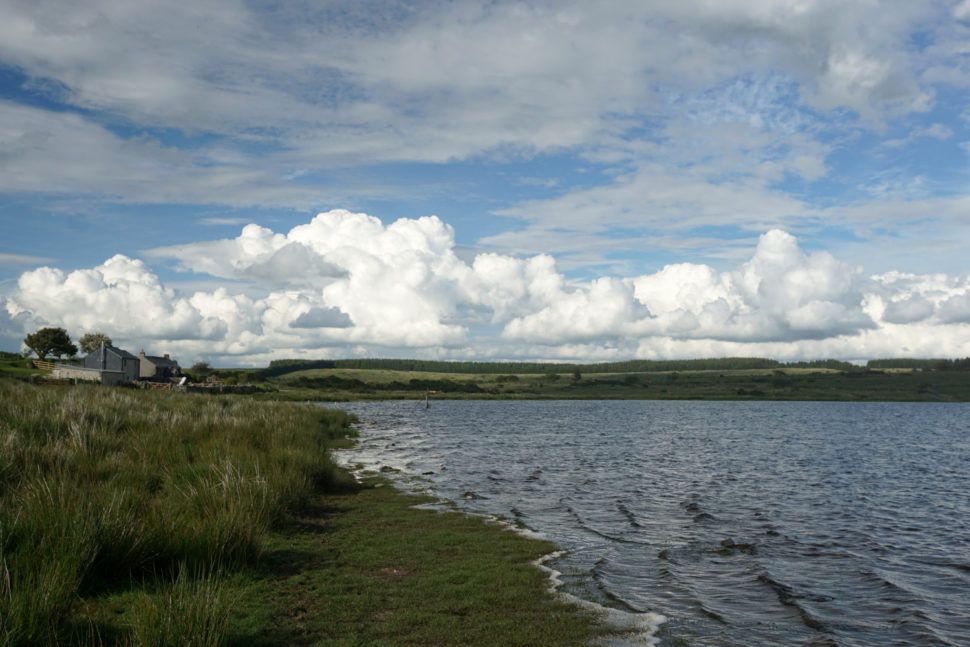 The scene of a dying King Arthur entrusting his mighty sword Excalibur to his last surviving knight Sir Bedivere is immortalised in Tennyson’s epic poem.

I am so deeply smitten thro' the helm
That without help I cannot last till morn.
Thou therefore take my brand Excalibur,
Which was my pride: for thou rememberest how
In those old days, one summer noon, an arm
Rose up from out the bosom of the lake,
Clothed in white samite, mystic, wonderful,
Holding the sword—and how I row'd across
And took it, and have worn it, like a king:
And, wheresoever I am sung or told
In aftertime, this also shall be known:
But now delay not: take Excalibur,
And fling him far into the middle mere:
Watch what thou seëst, and lightly bring me word. 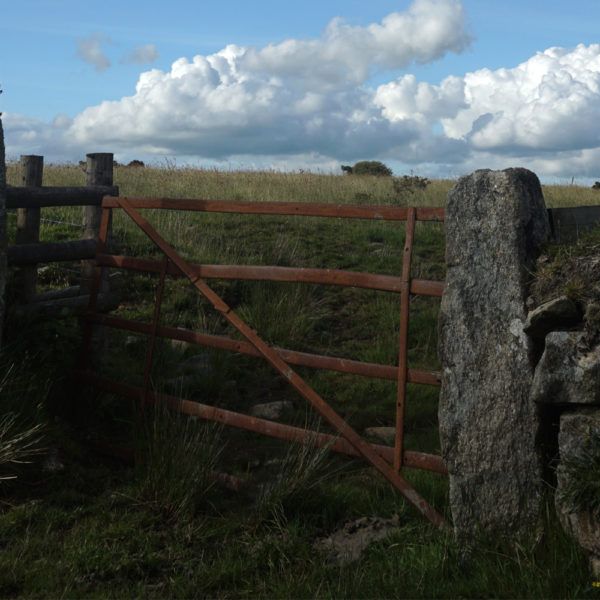 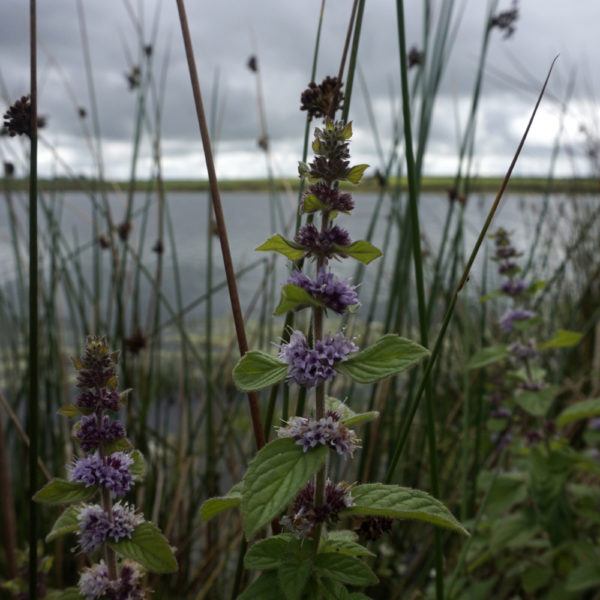 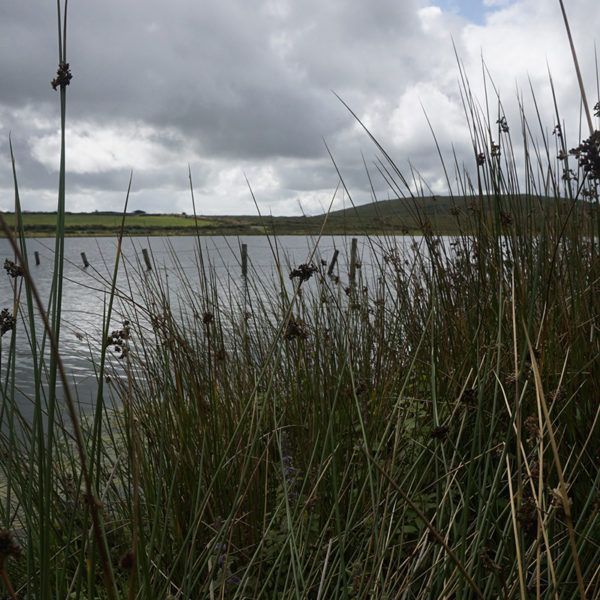 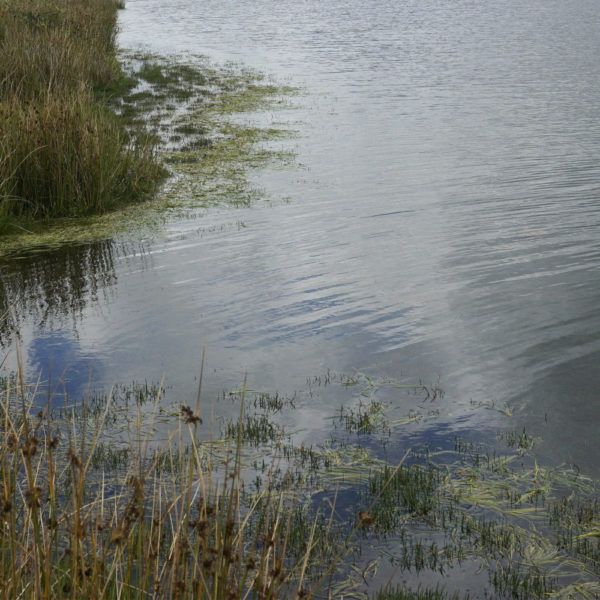 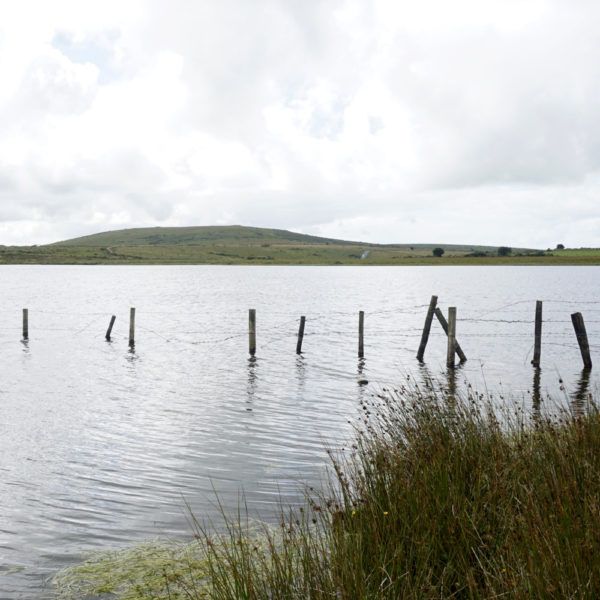 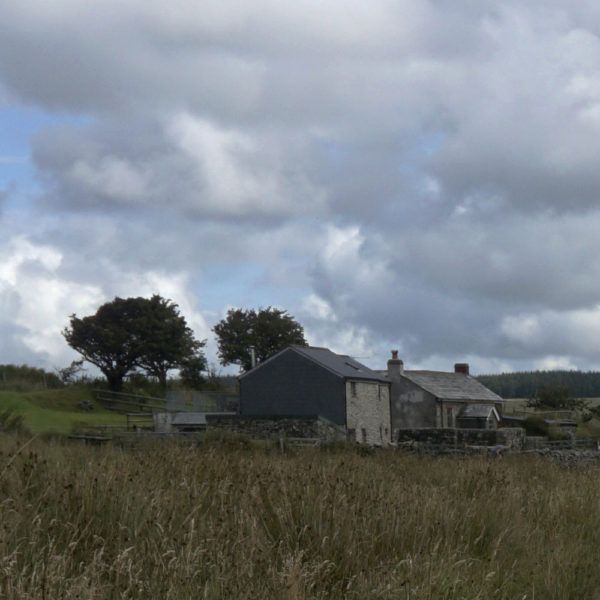 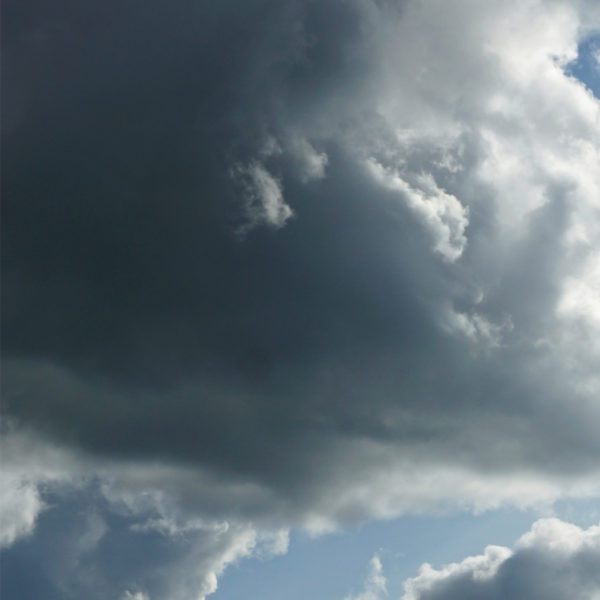 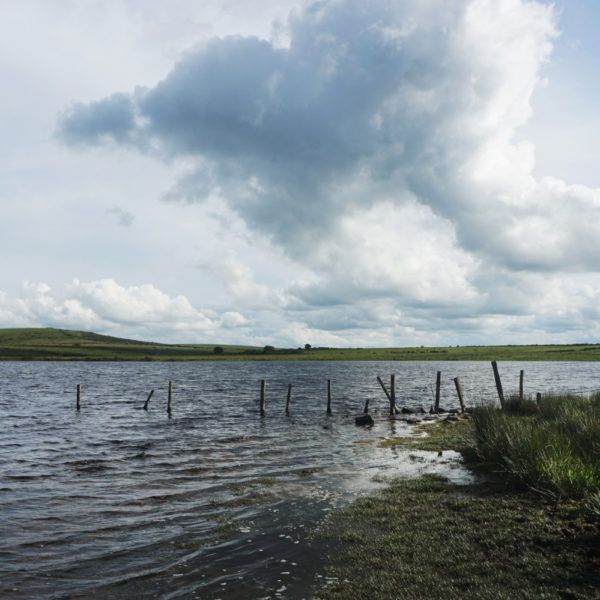 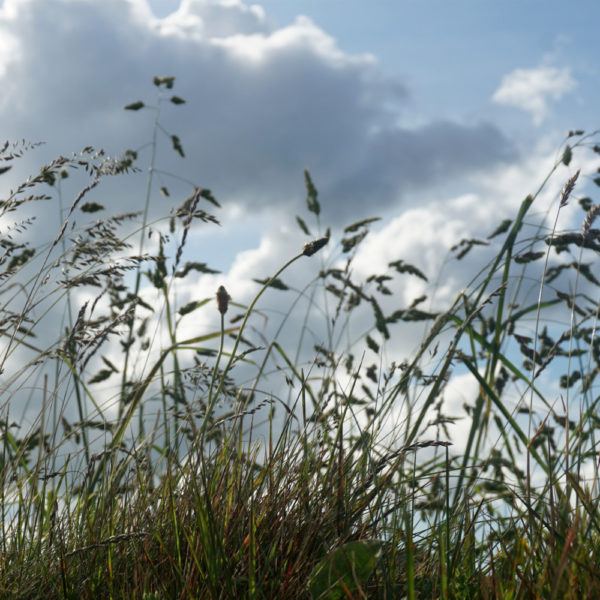 Clutching the sword Excalibur, Sir Bedivere hurries to the lake. Some say the Pool of Dozmary in Cornwall’s Bodmin Moor was that very lake. About a mile in circumference, it is set in a basin surrounded by hills and lies on a tableland that borders the vale of Fowey. No obvious streams or springs feed Dozmary. It is ringed by bulrushes and its solitude and the darkness of its waters give it an air of melancholy. In the old days it was believed to be bottomless and haunted by evil spirits.

Sir Bedivere is at the lake.

That whistled stiff and dry about the marge.

Twice before he had tried to toss the sword into the water but was unable to part with such a beautiful and powerful weapon. Yet he cannot refuse his king and the weapon would be dangerous in the hands of anyone but Arthur.

It is night and the ‘skirts of a long cloud’ are brightened by a winter moon. The sword’s haft glimmers with diamonds and ‘topaz-lights’. Among the beds of bulrush, Sir Bedivere clutches the sword, then hurls it into the lake.

Made lightnings in the splendour of the moon,

And flashing round and round, and whirled in an arch,

Seen where the moving isles of winter shock

By night, with noises of the northern sea.

So flashed and fell the brand Excalibur:

But ere he dipt the surface, rose an arm

And caught him by the hilt, and brandished him

Three times, and drew him under in the mere.

And lightly went the other to the King

The hand that rises from the water to catch Excalibur belongs to the Lady of the Lake, the ruler of Avalon.  She had given Excalibur to King Arthur to help him defeat enemies of Britain and it is now returned to her safe-keeping until such time as Britain may need it again.

Morte d’Arthur is a good entry point into the Arthurian world of Tennyson. This is the first of his poems based on Sir Thomas Malory’s Morte d’Arthur, the version familiar to Shakespeare.  Other Arthurian poems followed, ending in Tennyson’s blank verse epic Idylls of the King. This shorter poem was written shortly after the death of his friend Arthur Hallam for whom Tennyson developed an intense spiritual (possibly physical) passion. The portrayal of the regal Arthur may owe something to Hallam. Certainly the poem’s deeply melancholic tone echoes the poet’s feelings at the time he began to write it early in 1835. We will revisit Tennyson later.

In her book Invisible Cornwall, Daphne Du Maurier writes that Dozmary Pool has many moods. Some days it is calm and can tempt the paddler,

but once a whisper of a breeze ripples the surface the colour changes to a slaty grey, ominous and drear, and little wavelets splash the shore, pebbled with brown stones and peaty mud. Then we forget that it is only five feet deep, and look for the rising hand to break the surface, reaching for Excalibur.

This is one of the oldest known surviving songs in the English language, and was composed by English mystic and hermit, Saint Godric (1065 – 1170). He was a contemporary of Geoffrey of Monmouth, who in 1136, was one of the first to set down the legend of Arthur. This work was the main source for Tennyson’s poem. The Australian classical musical choir Lumina Vocal Ensemble performed this piece live at the Adelaide Fringe Festival in March 2012.  Singers are Sam Thorne (solo), Rachel Sag and Michele de Courcy, and the musical director is Anna Pope.

This site is linked to another legend connected with a man believed to have lived in the early 17th century. Jan Tregeagle was Cornwall’s version of Faust, an evil man thought to have made a pact with the devil for power and money. He was a magistrate in the Duchy of Cornwall, possibly living in Bodmin, and was renowned for handing out harsh sentences. There were rumours that he had murdered his wife and had acquired his wealth by cheating an orphan from a rightful inheritance.

But as he grew older, fear of death began to gnaw at him and remorse for his sins grew. In an attempt to buy salvation, he threw money at the church and good causes. Aware of his pact, the local priests tried to save his soul from the devil with exorcisms and prayers. After his death he was buried in Saint Breock Church, near Wadesbridge.

Soon after his death, a court case was heard involving land widely believed to have been acquired illegally by Tregeagle. Just as the judge was about to rule against a defendant, another witness appeared, who turned out to be the ghost of Jan Tregeagle. His thin, shadowy presence scared the wits out of the spectators, who ran from the court in terror. But the judge stayed on and questioned the ghost, who confessed to having obtained the land by deception. His testimony convinced the judge to set the defendant free.

Tregeagle’s return from the grave, his new-found honesty and his good deed meant he would now be in danger from the devil for breaking his pact. The clergy of Bodmin were summoned and hatched a plan to save him from the devil until Judgement Day, when it was expected that the Lord would decide whether Tregeagle belonged in heaven or in hell. To keep him safe in the meantime they set him a task that he was to perform unceasingly: he must empty the waters of Dozmary Pool with a leaking limpet-shell. Year upon year, Jan Tregeagle toiled at this fruitless task, just as Sisyphus had toiled ceaselessly rolling his rock up a hill.

But a terrible storm over the lake caused Tregeagle to stop work briefly and the ever-watchful devil sent his demons and the Hounds of Hell after him. Tregeagle fled across the moor to another intriguing place nearby and we will follow his journey there soon. But it is said that whenever the winds rise and storms thunder across the moors, Tregeagle can still be heard howling in despair at his plight.

It’s intriguing how layers of story associated with loss, mourning, death, murder and penance are connected to this place. Du Maurier believed the story of Jan Tregeagle became entangled in an even older pagan myth about a giant chieftan who ordered his daughters to kill their husbands on their wedding nights. This inspired the wrath of the gods, who sentenced the giant to ceaselessly empty the lake with a leaking limpet shell, which explains part of the supernatural element of the Tregeagle legend.

Does the knowledge of such stories tint a place for us? Do we arrive with preconceived notions and bias? I wish I’d visited Dozmary Pool prior to hearing these stories, so I could have made a clean assessment of my feelings for it. I’ve been twice now and it is not a place I wish to revisit. I feel uneasy there and cannot say why.

Read and view an illuminated version of the poem.

An article about the current Poet Laureate Simon Armitage’s modern translation of an anonymous 4,000 line poem about the death of King Arthur, that was written in 1400.

Just outside Jamaica Inn at Bolventor, on Bodmin Moor, there is a sign for Dozmary Pool. Following this road south for about two kilometres, you will arrive at the Pool, a body of water between Temple and Twelve Men’s Moor. Here is a map of the area.

And a walking route.

In 2017 seven-year-old Matilda Jones saw a sword while paddling in Dozmary Pool. ‘Don’t be silly’, said Dad. But lo and behold, they pulled a four-foot sword from the bottom of the lake.

And the owner of the sword came clean.

A British film director Joe Cornish appeared to be listening, for in 1919 he produced the epic adventure film The Kid Who Would Be King, about a boy who finds King Arthur’s sword. 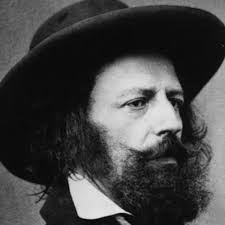 Alfred Lord Tennyson (1809-1892) was the Poet Laureate of Great Britain and Ireland and one of Britain’s leading Victorian poets. 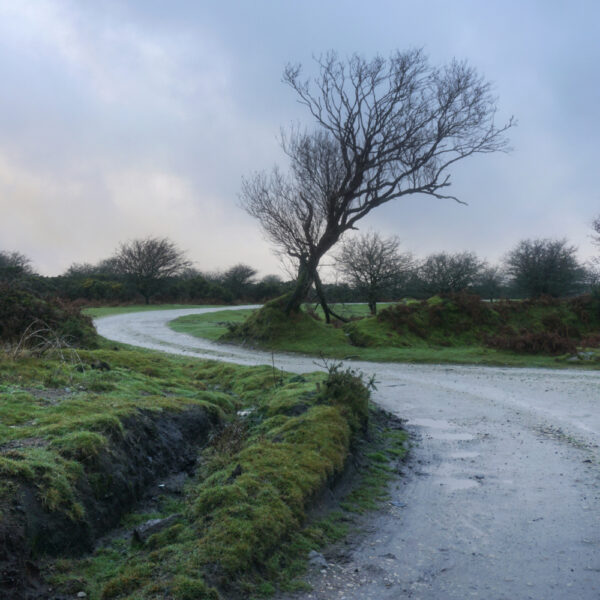 No Place for a Girl, Daphne du Maurier, 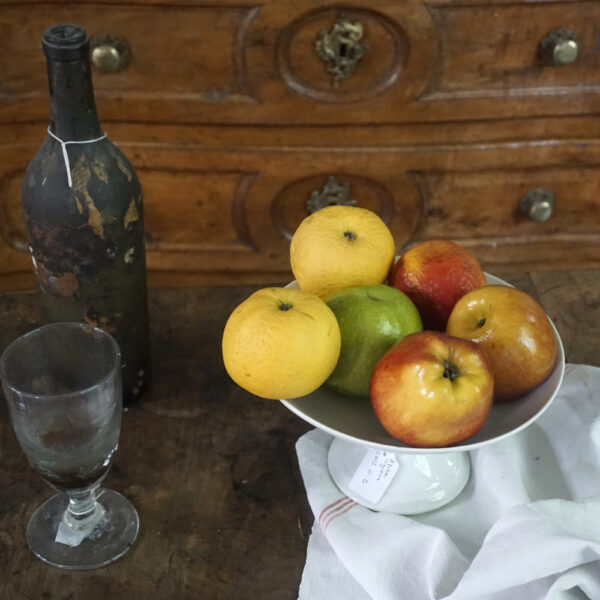 ‘With an apple I will astonish Paris’, which is precisely what Cèzanne did, producing works of genius in his final years from his studio in Aix. 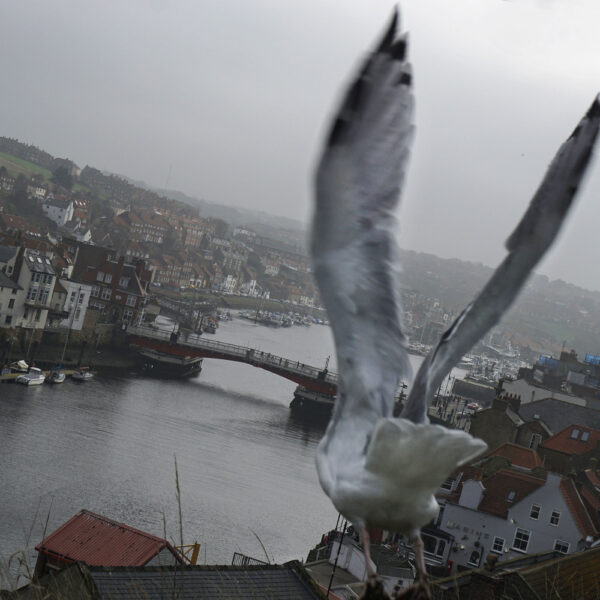 In 1897 Stoker revived a Gothic tradition, producing one of the most powerful horror tales ever written. His time in Whitby was pivotal for his book’s creation. 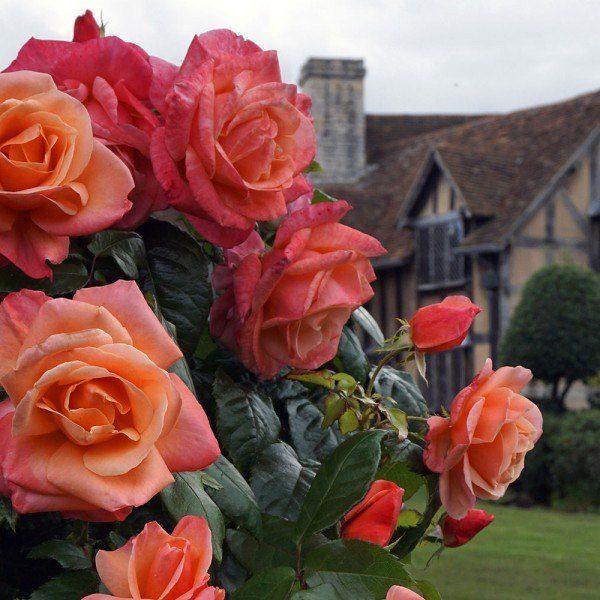